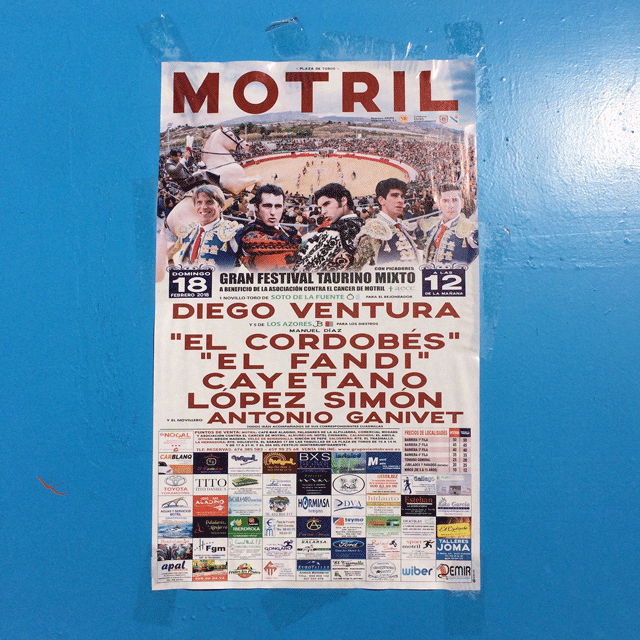 In his non-fiction book Death in the Afternoon Hemingway declared himself aficionado to label his passion for bullfighting. Death in the Afternoon still is an excellent introduction to this much criticized venatio (Latin for hunting; a type of entertainment – the killing of animals – exercised in Roman amphitheaters).

The poster shown above is a clear indication that there is still some love for venatio in Spain. It says that at midday, at twelve o’clock, of sunday the 18th of February 2018 in the Plaza de Toros in Motril, four well known and one novillero (a novice) bullfighters will appear in what is stated as a Big Festival of Bulls (Gran Festival Taurino). At least one ‘new’ bull, from the Ganadería Soto de la Fuente (owned by the well known breeder Diego Ventura; www.sotodelafuente.com) will perform and five from the Ganadería Los Azores.

For those that oppose bullfighting Hemingway stated in Death in the Afternoon (1932): “… anything capable of arousing passion in its favor will surely raise as much passion against it.” To console those opposed, the bullfighting of the 18th in Motril is performed for the benefits of the association against cancer of Motril. Its an open question whether this will make them feel any better.