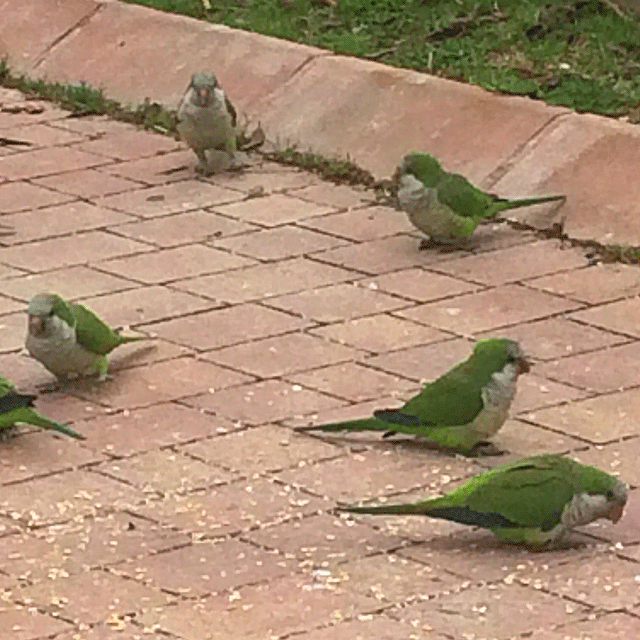 The wild parakeets in this picture live in the palmtrees that border the promenade along the beach of Torre del Mar. They make an awfull racket for such a small bird.

People who think that these birds belong in more tropical regions, better think again. Although the wild parakeets in Torre del Mar are not the same as the wild rose-ringed parakeets that live in the Vondelpark in Amsterdam, the size, green colour and sound are similar. And they are prospering in a climate which is even less tropical as in Torre del Mar.

There are several urban legends which explain for the presence of wild tropical parakeets in Amsterdam, where they appear to live in the wild since the seventies of the last century. The amount of wild parakeets in Amsterdam is estimated at 4000 at the moment. The first urban legend which explains their presence in Amsterdam is that an old lady out of spite freed a mating couple which she kept in a cage. The second is that a truck carrying hundreds of parakeets got in an accident, turned over and thus enabled the birds to escape. Those who are familiar with Amsterdam know that its impossible there for a truck to turn over. The third urban legend about the parakeets from Amsterdam is that they escaped from the office where they lived while movers relocated the office to another site. Another urban legend is that the parakeets escaped from their cage in Artis Animal Zoo, which is located in the city centre.

These urban legends may very well be true. But the more likely explanation is that some parakeets moved from Torre del Mar to Amsterdam on a holiday and decided to stay because they fancy a more mondaine and from a historical point of view more interesting city.