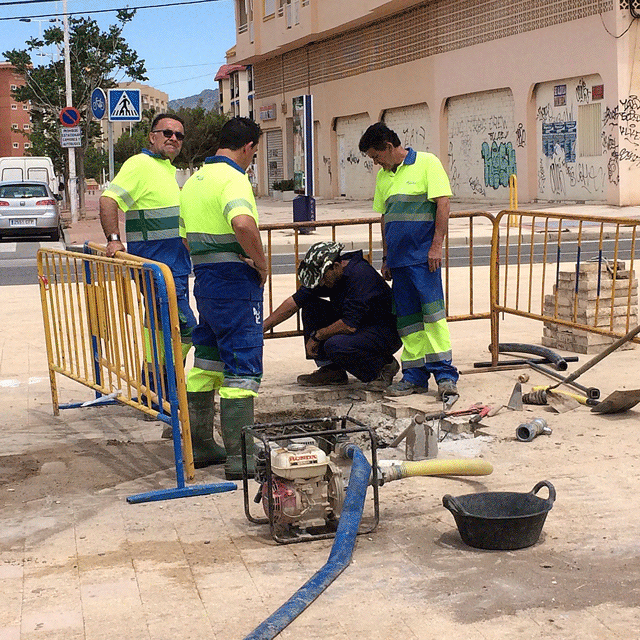 Men at Work are always an interesting topic of popular debate. Not only in Spain but everywhere in the world. To explain this I coined the phrase ‘sense of work’. This ‘sense’ is made up of ideas people have about their meaningfulness, work routines, the working environment, the work process and their self-image as a worker. This picture is exemplary for the theory of the ‘sense of work’.

The picture explains what constitutes the ‘sense of work’ of these men:

– Meaningfulness. There are four men to be seen in the picture and four cars and a van with the same logo where parked in the surrounding area of this hole in the pavement. This means that one men is in the hole. So as often in our pictures the secret is in what is not to be seen. Five men and five cars means that every man has his own car and hence must be very important and likewise very meaningful. Otherwise they would all have come together in the same car.

– Working environment. The work site is a stones’ throw away from the beach. Which is obvious from the fact that five men are present. As it’s obvious the site involves water problems. Indicated by the pump and hose. Might this be a seawater problem? That’s rather unclear.

– Process. The work process must be very complicated. Otherwise the four men, who are to be seen in the picture, would do something with their hands. The men are obviously hired for their brainpower. The man with the hands is in the hole.

– Self-image. Wearing a uniform enhances the self-image of these men. The uniforms are impeccable. Another prove of their brainpower. Which also enhances their self-image. And of course being able to drive a company car all by yourself.

Some people always make fun of these kind of work sites: one man at work and four men watching. But they always underestimate how intricately complicated work is in a modern society.