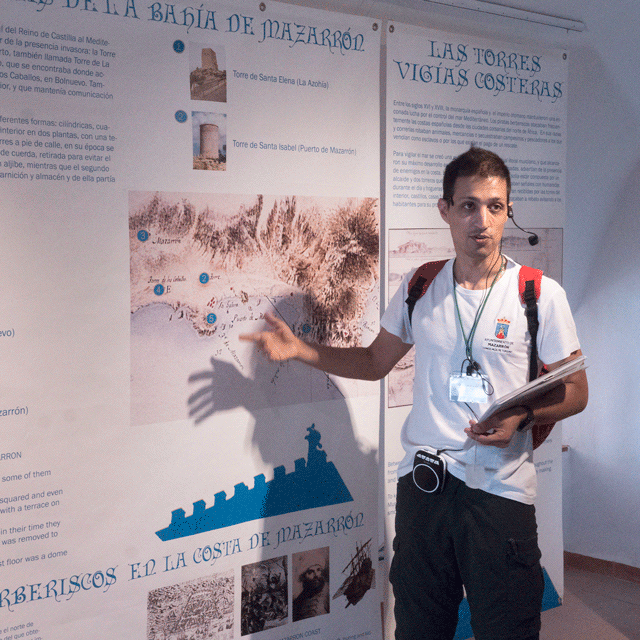 What is a better way to get to know a specific area – and pick up a few words in Spanish and soialize with the locals – but through a gifted guide. This is Jose Maria, a historian who studied at the University of Murcia.

Today, during a two hour excursion, he explained (in Spanish) the existence of five late Medieval towers on the coast of Mazarrón and took us up to the Cabezo del Plomo.

The tower where this picture was taken is the Torre de los Caballos (The Tower of the Horses). The five torres vigias costeras (coastal watchtowers) where supposed to protect the few small villages and the mines on this part of the coast against piratos Berberiscos (Berber Pirates) after the Moors had been driven out of Spain (1492). The name of the tower had no other significance than to facillitate memory. Since horses where very common in those days the choice was easily made.

The Cabezo del Plomo (Hilltop of Lead) is a little dwelling of five very tiny houses which where constructed and in use between the fourth and third century before our era. In those days people lived from the fish from the sea and the abundant wild live in the green fields of Mazarrón. The lead they found on the hilltop was used as fishing and hunting gear and as ornaments.

Despite the fact that we could only grasp half of the comments, due to our still very meager control of the language, we were surprised by the historical significance of Mazarrón. Socializing with the locals appeared to be a bit more difficult. Socializing and trying to keep up with the permanent flow of information voiced by Jose Maria was a bit too much. Anyway, most fellow participants where very friendly and Spanish, but no locals.