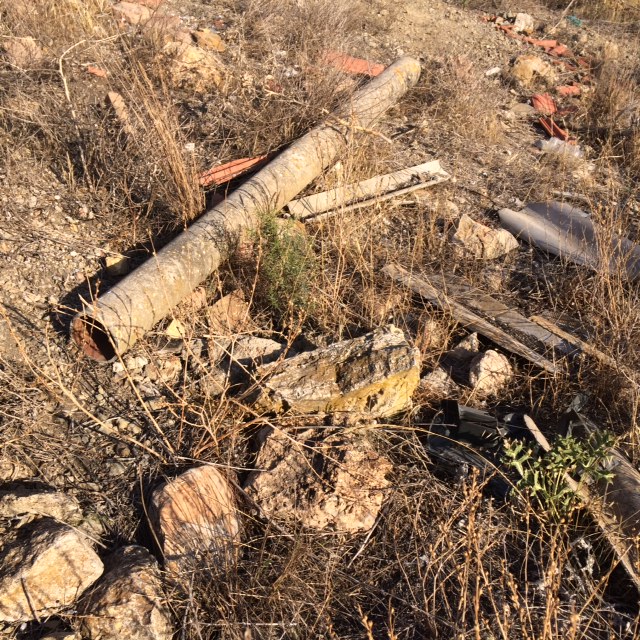 Nothing in La Palabras’ issue 366 (17 de Marzo de 2018) about bingo or shuffleboard. The cover of the magazine features the battles over the pensions and feminism that in Spain took to the streets early this year. For years on end the pensions are not leveled out with inflation and the pay gap in Spain between men and women is 23%. So these battles appear to be justified. However, to cater to the demands of pensionistas and feministas, will cost money. A lot of money. Public money and from private enterprises.

Now we’re here in Mazarrón and explore the surrounding area and stroll through the countryside, another article in this issue of La Palabra springs to mind: La Lucha Contra el Amianto Continúa – The battle against asbestos continues. The article ends with the complaint that everywhere in Leganés the remains of amianto tubes can be found and that the local government, despite their legal obligation, doesn’t act upon it.

The amianto problem is huge in Spain. In the metro trains in Madrid amianto has been discovered. 7000 employees of the metro will be medically checked. Not a word about the passengers. In Murcia, which is about half an hour by car from here, 567 kilometers of amianto tubes have to be removed. The costs are estimated at about 414 million euros. All in all, an estimated 40.000 kilometer of amianto tubes have been installed to transport drinking water. All these tubes have to be removed.

It’s totally unclear whether these tubes will ever be removed. What is clear though, is that they are in a state in which they slowly desintegrate. Due to the severe weather conditions here. It’s this desintegration which makes these tubes highly toxic for those that live out here in the campo. An epidemiologist would be able to start and end his scientific career here.

In addition, many sheds and garages that where added to private houses here the past fifty years, were covered by amianto roof plates. In the picture you can see some remains of these plates on the right side of the tube. Houses were also issued with amianto water reservoirs. The removal of these plates and reservoirs will also cost a fortune.

A beautiful magazine La Palabra. But the challenges it serves us are overwhelming.