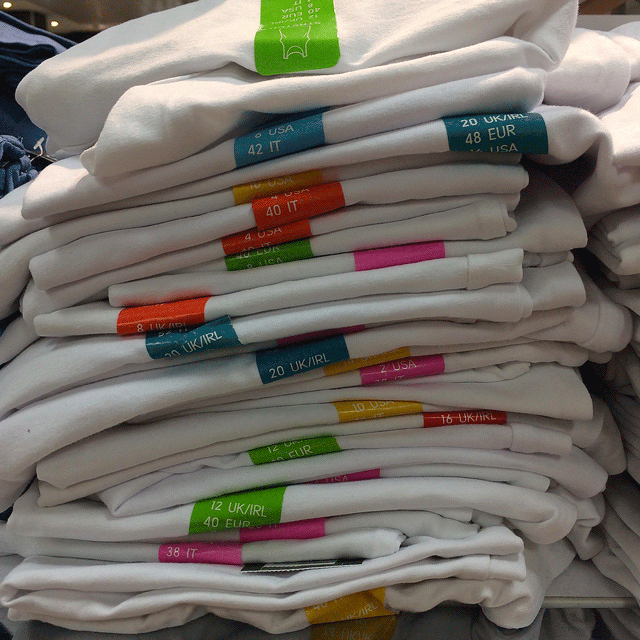 Okay, I make an exception for the bookshop we saw today in het Centro Comercial Espacio Mediterráneo. A high quality bookshop. I want to buy many books, but I promised that from the day we left Holland, I would only buy electronic books.

Back to ‘shopping’. The picture you see, is taken at Primark. A clothing shop. Although they call themselves ‘a fashion shop’. Fine by me.

What is very good at Primark is that you can judge the sizes of the clothes very easily by the colors of the tags and markings on the clothes.

What is not so good at Primark is the cajas, the cash registers, where you have to pay. There was a long row and only one register was open. While waiting for Hannie to come back from the register, and this is why I also love ‘shopping’, I was studying the staff.

Some four employees minded ten ‘ladies bags’. They tried to distribute the bags on a rack. During the fifteen minutes it took Hannie to pay for the three shirts she bought, the employees swapped the bags at least five times from one hanger on the left of the rack to a hanger on the right and back again. Then one of them walked away with two pink bags, returned with two pink bags (they looked the same but I can’t proof they where the same), walked away again with the two pink bags (this I saw) but did not came back in the time I studied their behavior. The other three waited for the disappearing colleague to return. In the mean time all the nine other registers remained unoccupied.

For those of you that might think, ‘don’t you have more usefull things to do’, I am a social scientist so I am allowed to study people. The more unexpected the better. And since Richard Sennett and all the other social scientists study more serious behavior, such as pottery and playing the cello, Bach and big cities, I tend to study more mundane issues, such as shopping. Besides it would have been very impolite to leave Hannie and go about my own way.

To close this exposé, we would like to wish everybody a lot of employees.