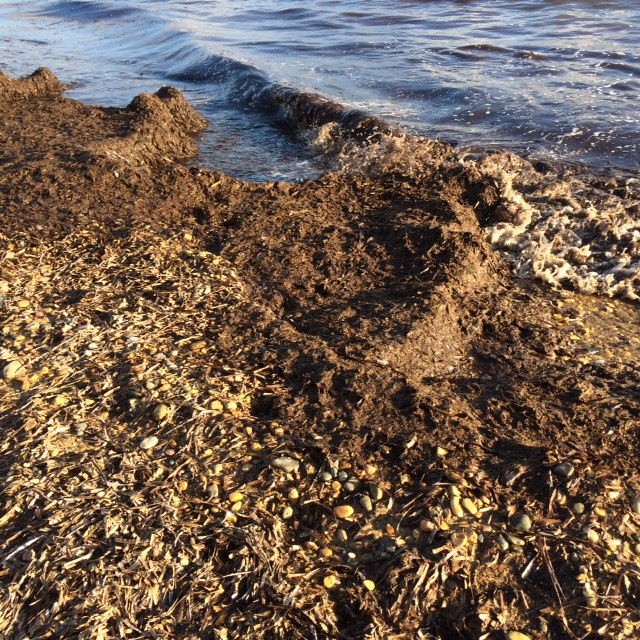 Whether it’s the time of the year or we didn’t pay enough attention, at certain parts of the beach there are huge piles of brown seaweed. Probably the stormy weather of the last few days pushed the weed up shore.

This doesn’t explain for the origins of the seaweed. There is a story that goes back to the zenith of global sailing. When sailors past the equator for the first time, they had to appear before Neptune, the King of the Seven Seas. Since sailing vessels passed the equator at the same time, there are many Neptunes. A phenomenon that can be compared with the appearance of Saint Nicolas and Papa Noël in so many houses at the same time.

All these Neptunes do not only have a wild bush of hair on their head, but they also have a long beard to camouflage the thick wood of small hairs that grows from their chest. Since it’s always very warm near the equator and Neptune is used to live under water, specifically these smaller hairs on his chest itch like crazy. Consequently Neptune scratches his chest all the time he is on deck.

When Neptune was gone, the deck was littered with thick chest hair and the ‘all hens on deck’ was given to sweep the hairs away because in those days sailors had nothing better to do then clean the ship all day. For years now these hairs appear as seaweed on our shores.

This story is as true as the deer with the ‘little red nose’ and the promise of Saint Nicolas to take you with him to Spain if you had been naughty. Up until this day I always had to go myself.