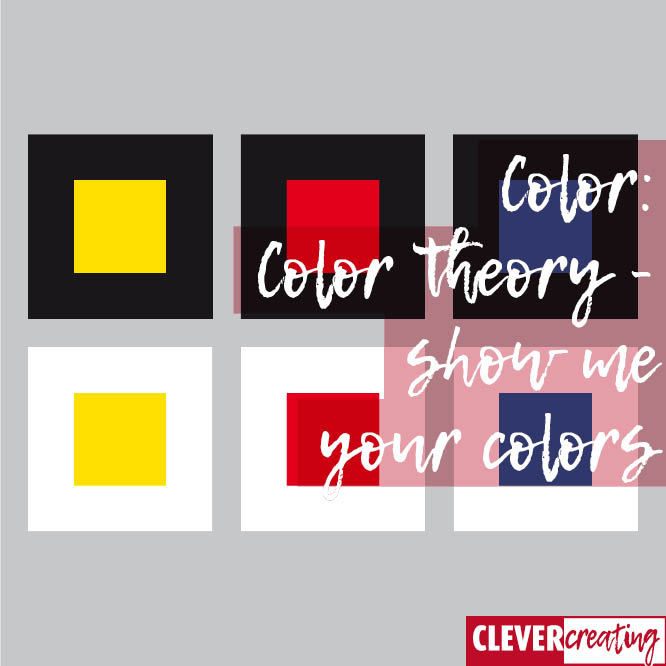 One of the best books in my private library is “The Art of Color: The Subjective Experience and Objective Rationale of Color” by Johannes Itten, a teacher at the Bauhaus that I admire so much. Of course Itten’s notions are only one way of looking at colors. There are many researchers, artists and scientists that have constructed a color theory. But it seems logical to me that as a designer and artist I have a strong affinity with a fellow artist.

Itten explains about the reality of color and the way we as humans perceive colors. Colors seem to affect each other. That influence is an action of our brain. “Eye and mind can only by comparison or contrast come to a clear perception.” On a black background yellow, red and blue will have more strength than on a white background. Both artists and designers take this phenomenon into account when creating their own work.

Are you familiar with the expression “Red combined with green is a farmer’s decency”? It’s probably only a Dutch saying. Shutters and frames of the old farmhouses used to be painted in red and green. It is not meant positive though, because the expression means that something is of bad taste. 😉

A person that is colorblind can not distinguish green from red. The intensity of the colors red and green is the same. And if you’re not colorblind you can feel dizzy if you see the colors next to each other. Sometimes I see books that have a red cover with green letters or vice versa. That is so hard to read, that my desire to buy the book dies at the same instant.

In the old days the electricity cable used to have one green and one red wire. Thank goodness they were replaced by a brown and blue wire. Color blind electricians made too many mistakes!
The funny thing is that one of my printers is color-blind, but he has no problem with that whatsoever. He uses a densitometer to stay in control of the printed colors and therefore doesn’t have to rely on his own eyes!

Yellow, red and blue are the three primary colors. Black and white, and the mix of them, gray, are not really colors, but they are important because of their effect on other colors. The exact same gray square in the middle of the orange and the blue frame appears to be a cooler gray in the orange frame and a warmer gray in the blue one. No matter how your monitor is calibrated – and this is something I have absolutely no influence on, each screen presents the colors differently – I expect that you can see the different appearance of the grays in the example below?

Isn’t this amazing: I had been studying “The Art of Color” for some days, when I went to a seminar in the Graphic Design Museum in my hometown. The first speaker brought up Edward Adelson’s Checker shadow illusion. His question for the audience was, which square is the lightest grey, A or B?

The answer is, they are both equally light. I was amazed by the result. Aren’t you?