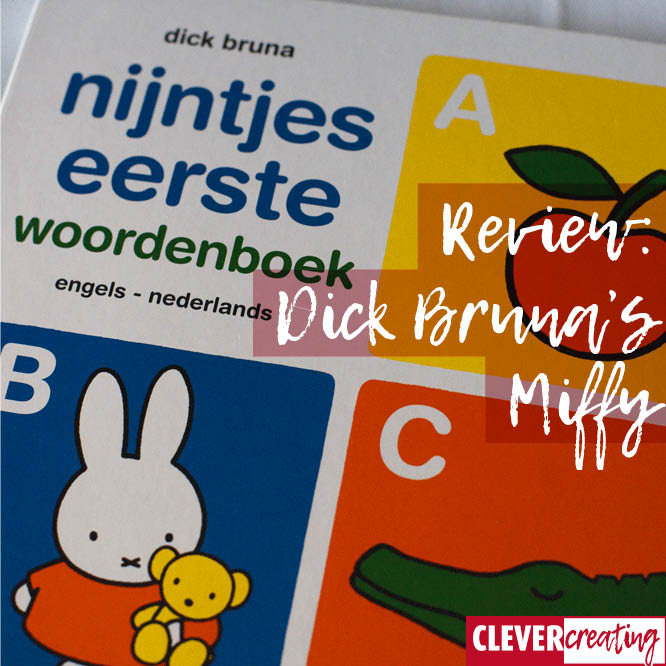 A gift for an abroad living grandchild My grandson is Spanish (and at the moment I write this he is 4 days old!). He is going to be raised bilingual. Spanish of course, since his mother is Spanish. And I thought his second language was going to be Dutch because of my Dutch son.

But his other language will be English. “How many people on the globe speak Dutch, Mum?” OK, I got it. It makes sense too, but still . . .

Yet I found the perfect solution. I gave my grandson a Dick Bruna book. It’s an alphabet dictionary, showing drawings with the English words and the Dutch translation underneath.

Originally Miffy is Nijntje.
Nijntje is short for Konijntje, which means Little Rabbit

A lot of my friends are grandma by now Our first present for our first grandson

My friends all said the same thing: Buy the kid a Bruna book, it’s a big hit.
I am a graphic designer so I have known the work of Dick Bruna for a long time, professionally, but never looked at it as a potential gift for a grandson.

I love his style of illustrating. But it pleased me enormously to hear from my friends that little children love it too. And that is what counts, isn’t it.

Bruna’s drawings are always in four colors: the three primary ones, red, yellow and blue, and one secondary color, green.
The forms are always a variation on the square, triangle and circle. All in a very clear manner, with plain panes and thick black lines. Nijntje is called Miffy in English
Nijntje is short for Konijntje, which means Little Rabbit.

Bruna’s most famous character is Miffy – Nijntje in Dutch. He started drawing this figure when his own kids were small, being on holiday in the dunes of Holland.
The books are like Sesame Street. Meaning, they are very educational, but also very simple and appealing.
As I said, I love them! I hope my grandson will love them too.

Dick Bruna’s father had a publishing company. Although A.W. Bruna considered his son to be a black sheep in the beginning because he didn’t want to enter the publishing profession and dropped out of art school as well, Dick published his own books with the Bruna firm and illustrated a lot of other books.

Bruna is in his eighties, but he still takes his bike every morning to go to his studio and draw. A second book we gave is about the square, triangle and circle
A nice touch is that the mother is now learning some Dutch as well !