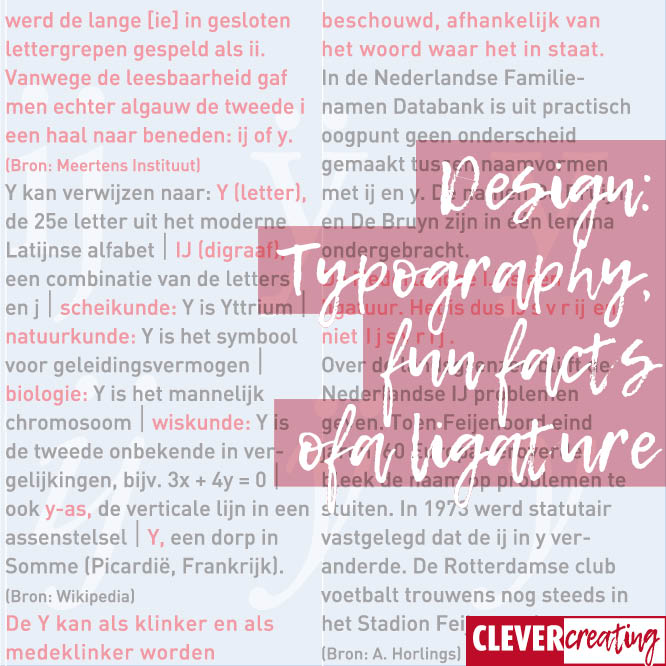 Every language has its own alphabet. My alphabet, the Dutch one, has 26 letters. Spanish has 30, or maybe 27, because it seems that some letters are deleted by the Real Academia Española. English has the same number of letters in the alphabet as we have – 26 – but the z for instance is rarely used and the English pronunciation of a lot of letters is very different.

The Dutch IJ is a called a ligature

Some of those letters have combinations that are written so often they form a new character, called a ligature. Such a combination is the ampersand &, the et-sign. It is a combination of the e and t.

In Dutch we have two peculiar letter pairs: the ij (which we call the long ij) and ei (called the short ei). The pronunciation of the two letter pairs is the same. I have tried to come up with an English word that has a similar pronunciation, but it’s hard. The i in wide maybe?

We consider IJ as one letter. EI are two letters.

IJ is an incomprehensible letter for a foreigner. That’s why the Dutch soccerclub Feijenoord changed its name in 1974 to Feyenoord when they wanted to be more known internationally.

The IJ is a ligature, a new letter that developed from two letters that belong together. (I have written more about ligatures here). Microsoft Word has a hard time with that concept and will display the Dutch word for polar bear – IJsbeer – as Ijsbeer (and will constantly try to ‘correct’ the J).

Even though IJ is considered one letter, it is not in the Dutch alphabet. So I can’t blame any foreigner for not understanding, can I. 🙂 What triggered me to think of all this? I saw a documentary about the renewed Stedelijk Museum in Amsterdam. The current managing director is an American woman, who clearly was given no explanation whatsoever about the ij in Stedelijk. So when the new logo was presented to her, she thought that the I and the J were put together so the number of letters of Stedelijk would match the number of letters of Amsterdam.

For a typographic specialist as I am that was really hilarious.

Dick Bruna's Miffy
Optical illusion: Straightening lines that are bend?
Typography: Ligatures are an inspiration to me
Do you want your own favicon on your website?