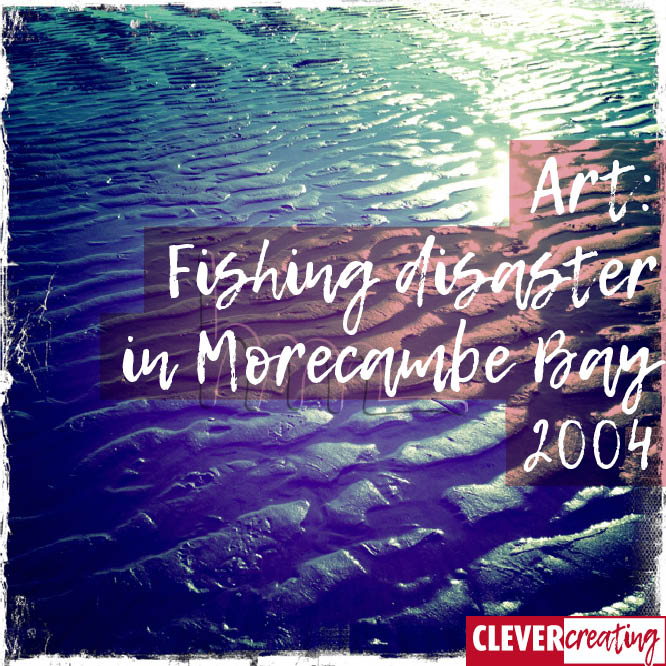 A group of 23 Chinese workers died

On 5 February 2004 a group of 38 cockle pickers was surprised by the upcoming tide. Only 15 of them survived this disaster. They were illegal Chinese workers, most of whom were previously employed as farmers. Only two of them were fishermen.

The group had been signaled by British cocklers who tried to warn them. But the Chinese didn’t speak English and didn’t understand the tapping on the watches.

There had been an emergency call by mobile phone to the authorities, but probably due to the language problem the scale of the disaster was unclear at that time. Only one person was rescued by helicopter.
Fourteen made it back to the coast on their own.

Reflections of artists on big events The intro text could have been a newspaper article. Something like this most probably was written in the newspapers in the days following the fishing disaster.
If I would have read it back then, I would feel sorry for the 23 people, sigh, and read on. Because that is what I do when I read the newspaper.

But in 2009 I was at the Aberystwyth International Potters Festival. And there I saw a movie that made a huge impact on me. This film is made by Alex McErlain, Stephen Yates and John Davis and shows the installation that Victoria Eden has made as a memory to the 23 Chinese cockle pickers who died.

In my eyes this is a major function of art: reflecting on big events. It’s a tradition that goes from the victory columns of ancient Rome to the Veterans Memorial in Washington. Sometimes made as an assignment from the authorities, sometimes made as an impulse the artist had.

The only limit to your impact is your imagination and commitment.
–Tony Robbins Victoria Eden’s installation is a meticulous piece of work. I can’t remember anymore how long the movie was, I just remember I was looking in awe at the incredible amount of work Eden has put into it. One of the stepping stones. Each stone is screen printed with text or pictures.
Photo credits: Victoria Eden ©

In the film Victoria Eden hardly had any help, so I understood the effort it took her to make the imprints in plaster out of the sand!
The plaster was a mold for the ceramics stepping-stones she made. Each form has the name of one of the deceased on it and a quote about migration, loss and modern slavery.

The 23 stones were laid on the beach after finishing. The tide could wash over them and eventually all the stones would vanish.

A connection – why do we appreciate art Recovering after the tide had washed over it, 1972, student project

Partly this monument appealed to me because I had done a beach project when I was a student at the Art’s Academy in Tilburg, the Netherlands. We made an imprint of the sand in plaster and because it was so big, we had a lot of difficulty getting the huge thing out of the sand and in an upright position.

And partly because I sympathize with those underpaid, invisible, hard working people that only tried to make a living.

What do you think of this monument?

I like the whole idea behind this monument of Victoria Eden. The idea of temporary life and stepping-stones to the left behind Chinese families. What do you think?