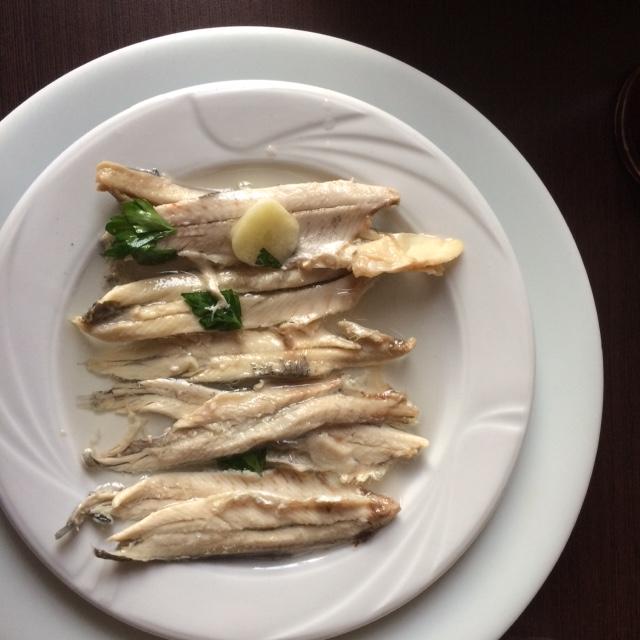 In the mornings it’s coffee or tea with tostada. In the afternoon it’s a cola zero or schweppes with tapas. In this case boquerones, which are sardines in vinegar.

Over here life is pretty cheap, but they are sparse on the tapas. In Andalusia and Madrid we always got a tapa with our drink. That is not a custom in Murcia, or at least not in this region. Maybe in other villages or in the cities we will have more luck. 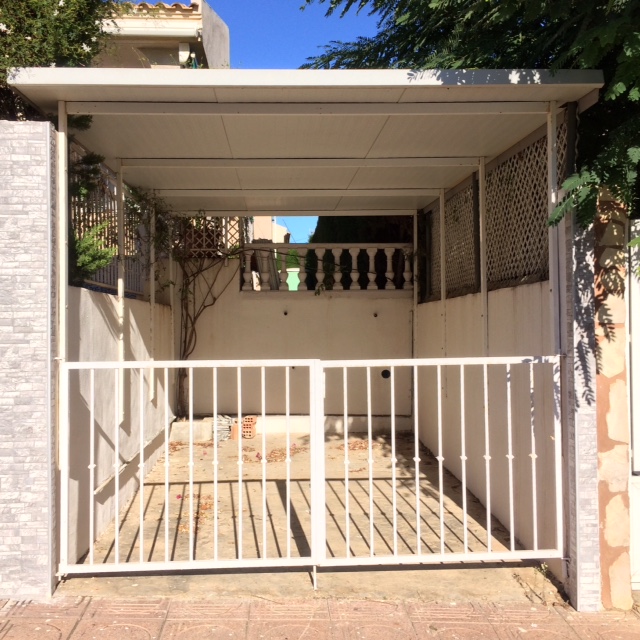 Every house in ‘our’ street has a cochera. Nobody uses it because it’s very difficult to get in and out of it.

It reminds me of a television item I once saw about the smallest garage ever. The owner did use his garage and in a very ingenious way. Marvelous! 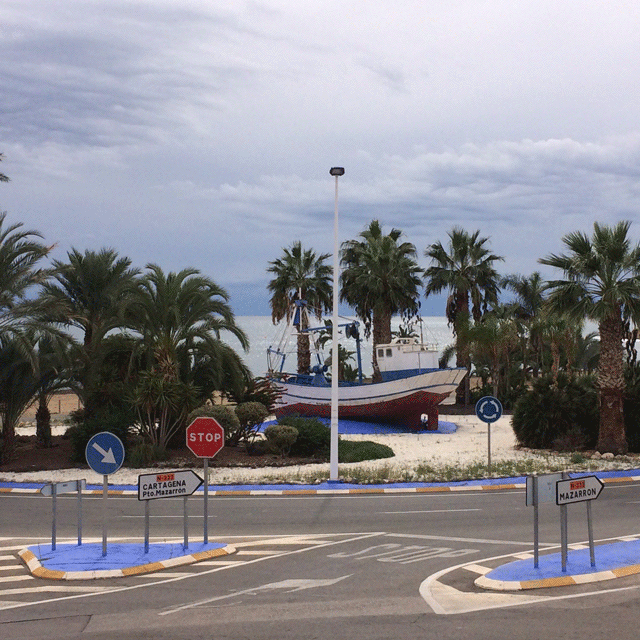 This roundabout marks the start of one of the outskirts of Puerto de Mazarrón: El Alamillo. And at the same time marked the halfway point of our walk today.

It was exactly an hour to get here, the same amount of time half of the walk yesterday took us. But since the route was a bit more difficult we didn’t exactly walk the same distance, although still a respectable 8,5 km.

We were lucky to find a restaurant here as well.

This time we didn’t take a montadito, but a tostada con tomate. As you might know we changed our lifestyle last year. And when you ban sugar from your diet, you’re not that keen any more on cake or other sweet stuff. The tostada is a really good replacement.

Satisfied we went on our way home. And getting there were very proud of ourselves. 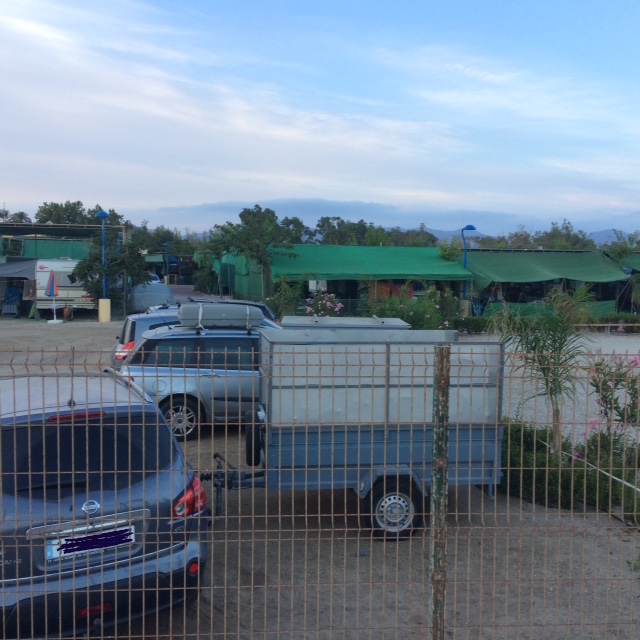 Yesterday, during our daily walk, coming from the Playa de las Moreras, along the Playa Canina, and taking the direction of the boulevard of Bolnuevo, we passed Camping Playa de Mazarrón.

During most of the year there are a lot of campers and caravans from people that hibernate in Spain. But now during verano (summer) the camping looks really crowded.

Everytime we pass the camping, we go back in our minds to the first time ever we arrived in Bolnuevo. During 2016 we more and more concluded that we wanted to be closer to our grandchildren. This meant we had to move to Spain.

We decided we couldn’t just leave everything behind and go and live there. Thorough research was required. We would first spend Christmas at the family in Martorell and from there move to the south and rent a house or an apartment. For one month at one coastal area and subsequently one month each at two other spots. Only one criterium was relevant: it had to be on a coast where most of the times the sun would shine. We only had to pick the right spots.

So after a few nights with google maps I suggested we first should go to Mazarrón, because there was a campground where they had those small wooden sheds we came to love during our regular visits to Camping El Garrofer in Sitges.

From Martorell to Mazarrón is a six our drive. So after a night in a hotel in Elche, it was a monday because we discovered that the Parque Arceológico El Alcudia was closed, we arrived in Bolnuevo around noon at the Camping Playa de Mazarrón. An almost friendly lady at the reception allowed us to go and check one of the cabins they rented out for 850 euros a month, with additional costs for electricity and water. We crossed the campground and noticed that the campers and caravans were so close to each other, you would be able to hear the neighbors eat and sleep.

But the cabin was the real surprise. It wasn’t made of wood, but of plastic. The rooms in the cabin were so small, you could hardly breath. Which was for the best because the cabin smelled funny and wasn’t very clean. We called it a chicken run.

The surprise got bigger. I noticed that at the two-square-meter-lawn of artificial grass in front of the cabin a German lady was venting her ‘chihuahua’ (I’m not sure this actually was a chihuahua, but chihuahua’s are awfully small, that’s why). The dog hung from the neck-yoke, could hardly yap, but produced a turd which would even make a Danish Dog proud. Both satisfied, the lady and the dog went their way, leaving us with a creamy colored vista.

Avoiding the obvious trap, we returned to the lady at the reception and with pinched voices, but kindly, told her we would think about it.

We decided to take a more serious route and looked around for an estate agent. There was one right across the entrance of the campground. But no agent was present. We walked back to our car and noticed an office that offered insurances in English. Somebody was inside.

We explained our problem, said yes to the question whether we already tried the local estate agent and hence were advised to go to an English estate agent in Puerto de Mazarrón. From then on everything went extremely smoothly. Within two hours we were settled in a lovely and big apartment, only 200 meters from the beach and on walking distance to all the amenities Puerto de Mazarrón has to offer. And for a price that was almost half we had to pay at the campground.

We stayed at the apartment for two and a half months and never bothered to explore any other areas. At least until December 2017. A story which you can pick up by reading this series of blogs from the beginning. 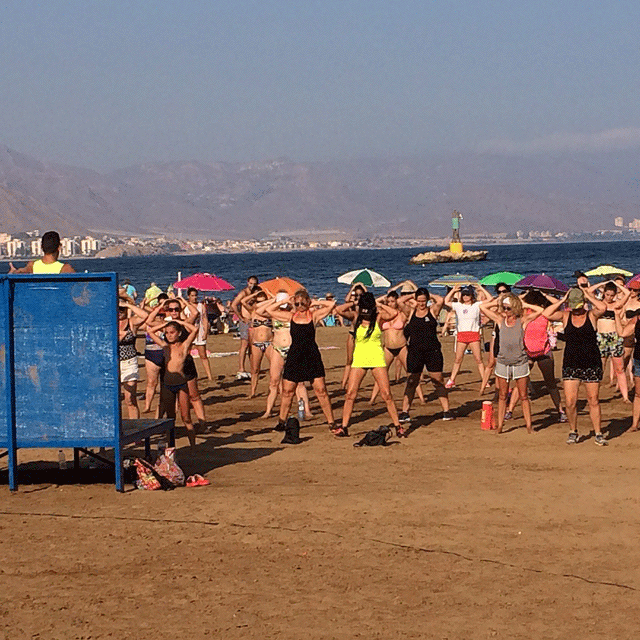 We sometimes complain it’s too busy at the moment (as if we would be the only ones entitled to the beach and the sea), but because of the summer it’s also very lively. There are all kinds of activities.

Today we encountered a big group of women mimicking a handsome man in the front. They were moving on music and ended their workout with stretching. In the burning sun, that was still hot at 6.30 pm.

Our observation: it was peculiar that apart from the little boy in the front, the group consisted solely of women. Hmmm. Do Spanish men not exercise? Are they shy showing their big bellies? Were they still in the water cooling down and chatting with their friends? 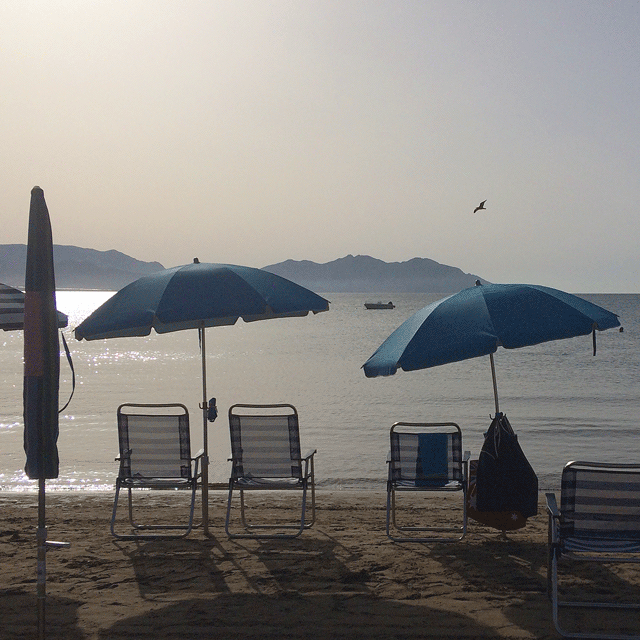 Have you ever seen a YouTube video about the race for the best place next to the swimming pool? People get up before dawn – not to do their exercises like I do every morning – and wait for the signal to rush to the desired spot, occupy it with their towels and run to the buffet for their breakfast.

These swimming pool runners have copycats. Every time we are early at the boulevard for a daily walk, we notice a lot of vacant chairs plus beach umbrella put there by the owners who want to sit first rank, real close to the sea, who then went off for their breakfast.

Giving us a chance to chuckle, because we think it’s hilarious. So they did a good deed as well! 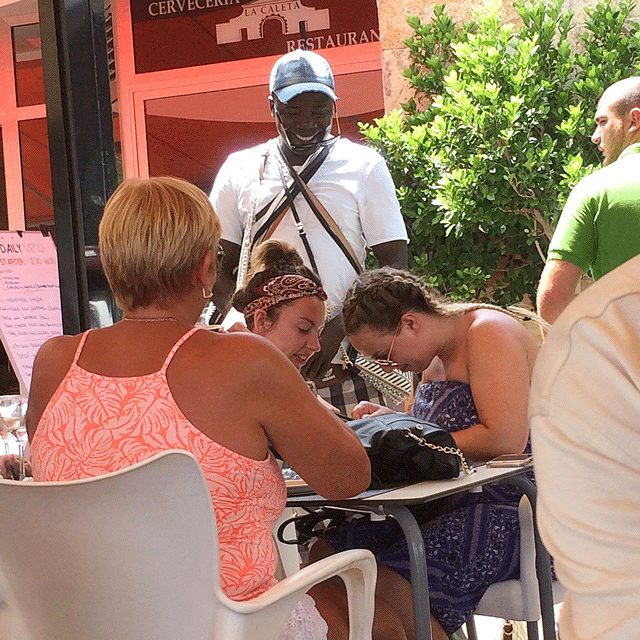 “I don’t mind them coming at my table to sell something”, a friend said. Until he too experienced how aggressive some of the vendors are and how many pass by.

Today none was aggressive, but there were even more than usual. At times no less than 3 vendors were roaming the terrace at the same time. For some reason we were lucky. Most of the time they skipped our table.

It could be that we were looking too dark. Usually I try to stay polite and acknowledge them, so I don’t think that was the case. No, I suspect it has something to do with numbers and alcohol. A table for two is skipped. A table without sangria or wine bottles is skipped. Their attention is flawless. The louder a table, the quicker they are standing next to it.

One way or the other, I don’t like it. You can’t sit quiet for a minute or have a conversation without continuous unsolicited interruptions.

As soon as lunchtime is over the sellers scatter on the boulevard. They spread a sheet and expose their goods. The reason for the sheet is, besides organizing a secluded space, that they can grab the 4 corners and run with their goods when the police arrive. Ambulant sales is forbidden according to the signs at the boundaries of villages.

Any rule is violated without a decent control system, so is this one. 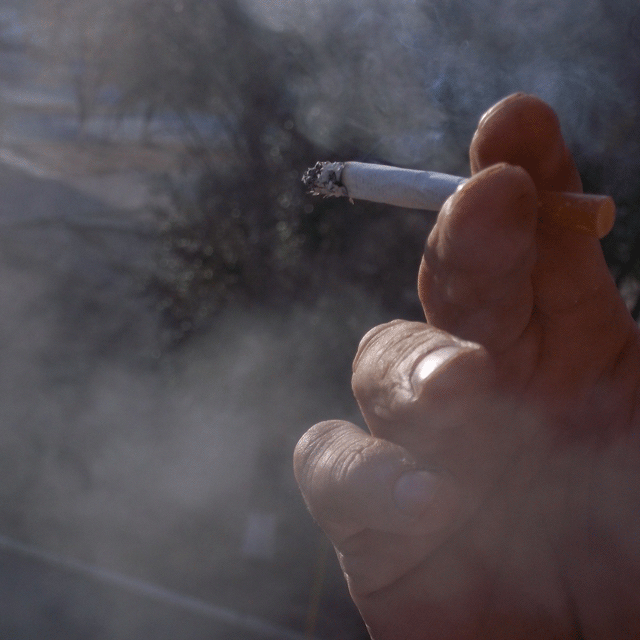 For some reason the theme of today turned out to be smoking. Which is kind of odd since we are both avid non-smokers.

It started with a business appointment in a small room where the owner obviously had just put out a last cigarette. Making me cough and not too keen to discuss a health insurance with her.

Then we went to our favorite eco-store to discover that his neighbor the bar was open, with 4 smoking guests on the terrace, including the bar-owner. In an area where there are non-smoking signs all over the place, mind you.

Part of our Tuesday routine is also the supermarket and strangely enough the entrance housed a beggar, smoking his lungs out and polluting the air.

So what is universe trying to tell us? That we may be happy to be healthy non-smokers? That we should feel sorry for addicted people? Or what? 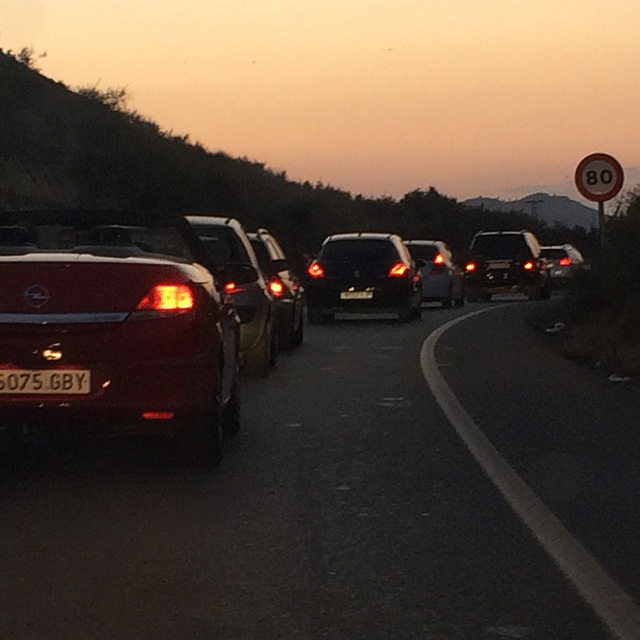 Nowadays we walk after 8 pm because of the heat during the day. Much to our surprise we saw a traffic-jam northbound when we entered Puerto de Mazarrón. It was a real exodus, but we weren’t worried because our walk would last an hour and after that we had to do some shopping.

Ha, what a miscalculation. At 10 pm the traffic-jam wasn’t diminishing at all, so we went at a footpace all the way from the port to home.

That’s why we decided to walk in the neighborhood of the house tonight. A bit warmer than on the seaside, but we just didn’t feel like ending up in a traffic-jam again.