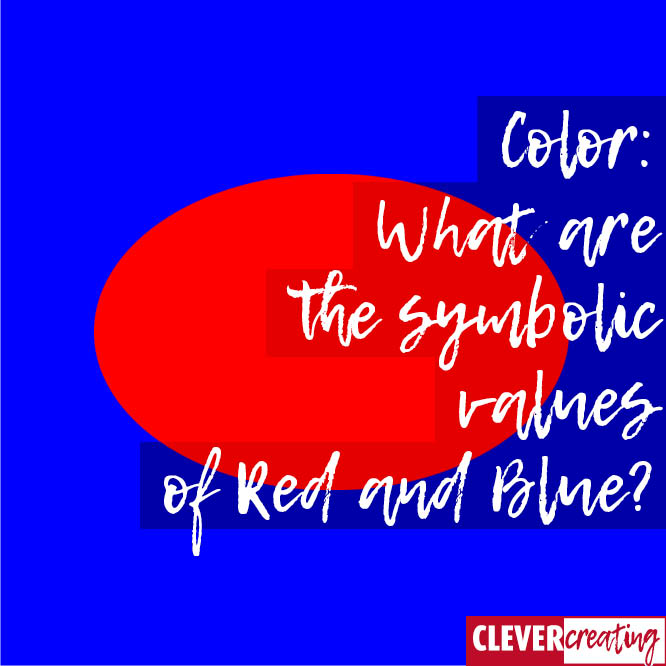 Watching the elections last year in the States I noticed that Red and Blue have a symbolic value in politics. So they have over here in the Netherlands, but the funny thing is it has an opposite meaning. Since I am interested in every aspect of color I decided to look more closely into the symbolic value.

In general blue is linked with peace, harmony, loyalty, friendship and faith. Have a look at expressions and meanings in different countries:

In the Anglo-Saxon countries blue also means melancholy or sadness – feeling the blues.

Blue, and especially ultramarine and lapis lazuli were the colors of the rich (who have blue blood by the way). Those were expensive materials with a rich appearance. If you ever saw the mosaics of Ravenna, Italy, in real you know what I mean.

Yves Klein has dedicated his life to the search for a specific shade of blue and eventually took a patent on a tone of blue he has made himself.

Blue is for boys (pink is for girls).  Blue stands for solemn, thrustworthy and reliable. Uniforms are often blue.

In Holland ‘those blues’ was an abusing term for people from Indonesia, a former colony of the Netherlands. Two musicians took it as a name of honor and called themselves “The Blue Diamonds”, reversing the meaning for the better!

Blue is called ‘cold’ in the color theory and is for instance used as a symbol of the cold water tap.
It’s a very spatial color as you have no doubt experienced yourself by looking at paintings or pictures of landscapes. The further away, the bluer the shades and tones are.

Blue is the political color of the VVD, the Liberal party in the Netherlands. But in the USA the blue states are the states that vote for the Democratic Party.

Red is the political color of the PvdA, the Labor Party in the Netherlands while in the USA the red states are the states that vote for the Republican Party.

Red is the color of warning and alarm. The red fire trucks, the red traffic light. Negative numbers are usually marked in red. When our bank account is negative, we are In the Red.
When soccer players make a really bad mistake they receive a red card.

Red is a fiery color, the color of love, red roses. The red heart, but also the red light district. The color of luxury. The red carpet at official events and celebrations of the nobility. The seats in the opera houses and theaters are usually red.

And red is the color of sacrifice, the martyrs who gave their blood. The red of the crusaders. The red rosette, that soldiers wear on their uniforms – the blood of a wound – to make it clear that they had been brave.

In most religions red is a sacred color. Most likely because our blood is red. It is a shade that is abundant in nature and has a deep impact on how we feel.

Red is called ‘warm’ in the color theory and is for instance used as a symbol of the hot water tap.
It’s a very spatial color as you have no doubt experienced yourself by looking at paintings or pictures of landscapes. The closer by, the more red the shades and tones have.

If we order sparkling water in the Netherlands we say “Can I have a Spa Red, please?” Belgium is only 7 miles from my house, but a waiter over there would have no clue what I was talking about. And Spa is a Belgium village! The reason is that the sparkling water comes in bottles with a red brand. The bottled still water of the Spa company has a blue brand. And you guessed right: we order a Spa Blue at times.

I was triggered by the red and blue states in the US, because of the opposing meaning. Leading me to the Spa Red or Spa Blue story. So I am wondering, do you have local stories that have Red and Blue with a specific local meaning?