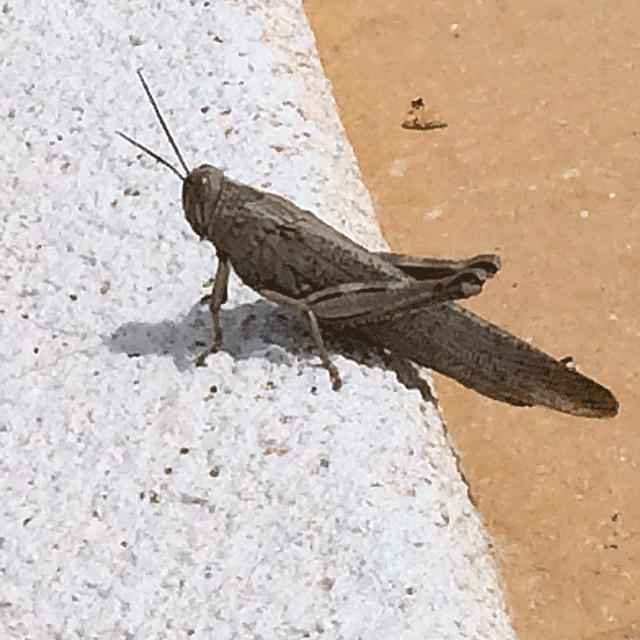 This is a grasshopper. A life one. About 10 centimeters in length. So it’s a huge one.

The story of the grasshopper is interesting. It starts with a disparaging and resentful ‘god’ who punished the Egyptians with ten plagues because the pharaoh wouldn’t let the enslaved Israelites go. Hence the song: ‘Let my people go …’.

Those that are acquainted with the bible, know that the grasshoppers are the eighth plague of Egypt (Exodus 10:4-20). Mozes told the pharaoh that unless he freed the Israelites, grasshoppers would eat all the food of the Egyptians. The pharaoh said ‘no’, and as promised by Mozes the grasshoppers fulfilled their duty.

The response of the pharaoh can be compared with a modern day variant: ‘the computer says no’. In which case the consequences are somewhat similar.

Today we would call this kind of punishment disproportionate. The more while the same ‘god’ told the pharaoh not to concede to the wishes of the Israelites.

Some people believe that ‘god’ did all this to show the Israelites how powerful he really was, so they would always do what he wants them to do. The modern day variant of this typical type of male behavior is called: totalitarianism or dictatorial. But back to the grasshopper, a beautiful animal that was truly abused by a fantasy which still plagues many people of this world.

The grasshopper in the picture is grey. That’s a problem. Because well fed grasshoppers are supposed to be green. If grasshoppers lack food they will behave as Mozes told them, but first change colours from green to grey or brown.

Since grasshoppers eat their own weight every day, let’s hope that this big one is alone. For if there should be hundreds or thousands of them, they would really be a plague. So far, we have not spotted other big ones. Yet …