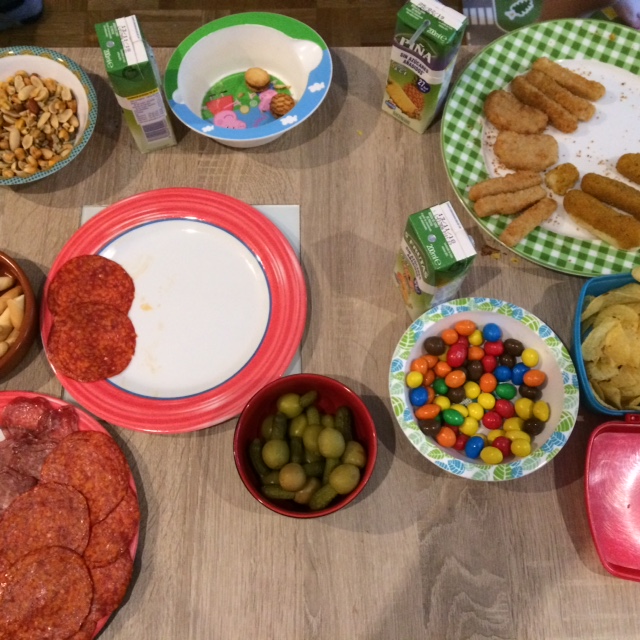 Yesterday was full of anticaption. Today was the day of suffering. At least it depends from what perspective you look at the birthday of a five year old.

The birthday boy invited some friends in the evening for drinks and treats. The treats you can enjoy from the picture. The rest you can imagine yourself. The party was a big success, because it ran completely out of control. The evening ended for the birthday boy between satisfaction and tears.

Satisfaction for all the presents he received and tears because his friends wanted to play soccer in an appartment which is even too small to play patience (a card play you do by yourself). Never mind, it was swell. It was a party nobody will ever forget.

For us the surprise came before the party really got off. To postpone our presence we went to a bar/restaurant. There were even two children’s parties. In another café the same, albeit the party was a bit smaller. But there was also a senior citizens party. When we passed on our way back we noticed the senior citizens had won. No more children in the party.

In the third café we could take a drink reasonably undisturbed. Were it not for the television on which Màxim Huerta, the minister of the department of culture in the new cabinet of Pedro Sanchez, announced he would retire after a week because he was accused of fraud. So, as soon as possible we returned to our own party to find out it was still alive and well. We rested our soul in resignation.