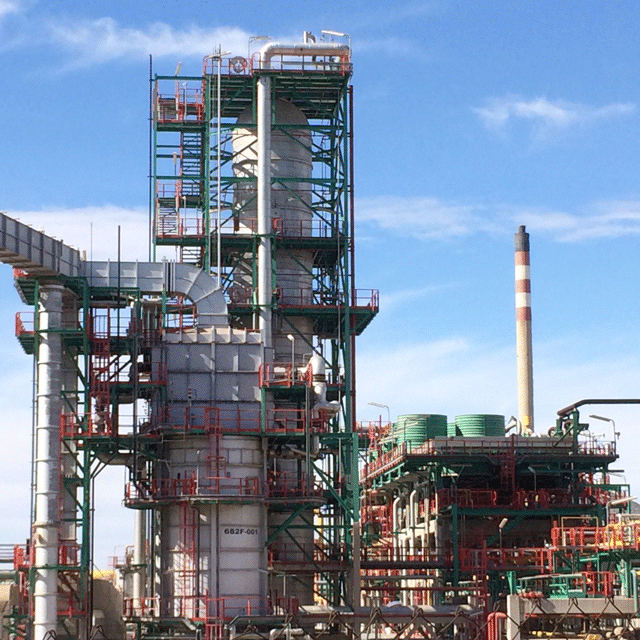 Cartagena is a lovely city on the border of the Mediterranean Sea. It hosts a naval base and a commercial port. But this commercial port is not the Puérto Deportivo (marina) or the Puérto Pesquero (fishing harbor) which are close to the city center.

The Port of Cartagena is next to Cerro de la Campa on the other side of the hill if you drive by car from the city across the N343 to Escombreras. In Escombreras this picture has been taken.

Escombreras is like the Rijnmond area near Rotterdam in The Netherlands. Full of refineries. We’ve been quite a few times to Cartagena but never noticed that there is such a large industrial area so close to the city. Driving through the area the smells are indeed similar to those in the Rijnmond area. Or Feyzin, the small village south of Lyon in France on the border of the Autoroute du Soleil (A7) and the river Rhône.

We still own a Michelin Tourist Guide for Spain from 1974, because it show places modern guides ignore. On the city of Cartagena there is a short entry which states: “The construction recently of an oil refinery at Escombreras (…), 9 km away – 6 miles – has brought it renewed prosperity.” The “it” being the city of Cartagena.

An interesting feature of the area surrounding the refineries is that it’s littered with the ruins of quarries that are out of use. Until the beginning of the 20th century lead, iron and zinc were mined here. The mining polluted the area to an extend that in many places no animal or plant life can sustain (except for refineries of course). But the colors are beautiful and the barren landscape has a quality of its own. They save you a trip to Mars.