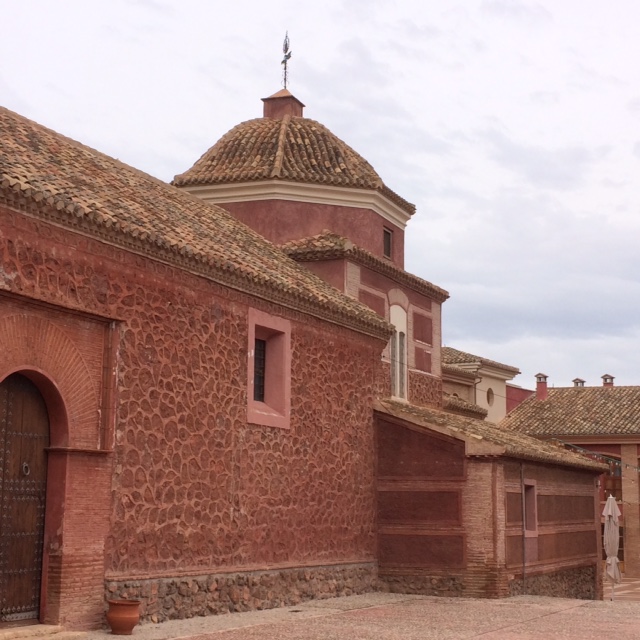 This is the Santuario de Santa Eulalia de Mérida. Already since 1644 Eulalia is the patrona (patroness) of Totana, a small village that lies at the end of a winding road of some seven kilometers.

The santuario (sanctuary) looks brand new, but it was finalized at the end of the sixteenth century. The devotion to Eulalia already started in the thirteenth century when the Military Order of Santiago was granted this piece of land by Alfonso X the Wise. They first build a small church and cloister there, which subsequently was replaced by this red chunk of bricks. The color very much resembles the colors of the earth you find around here in abundance.

How come a military order of Santiago winds up with Eulalia at the foot of the Sierra de Espuña? It’s very simple: Eulalia is from Mérida, as was the master of the military order – Pelay Perréz Correa – in the time Alfonso the Wise surrendered the land to the order.

The santuario is very popular. When we visited it, we couldn’t enter the church because there was a bola, a wedding. Everybody in fancy dress. But there is also a hotel. Which you cann’t book for saturdays and sundays because the guests of parties and bolas probably occupy it. And from this spot there are some hikes into the sierra.